As of today, Of Stars and Swords Vol 1: The Mad Lord is out on Comixology!  It contains the complete first story arc for the comic, as well as some extra things like a new short comic and, importantly, updated art. To give you an idea of what that means for the art (and the lettering in most cases), Caroline put together a number of comparison panels that we've shared in the past few months, and I wanted to compile them all here for easy viewing.

Lastly, Volume 1 is the ONLY way to get this updated art. We won't be updating the webcomic or the previously released issues. 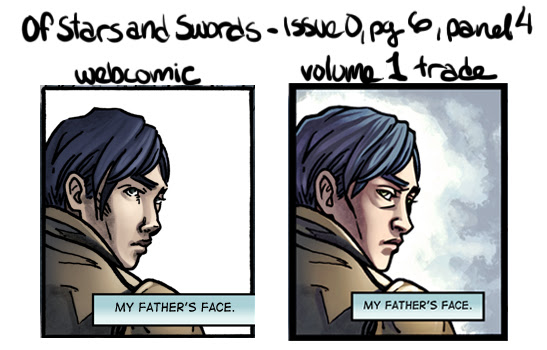 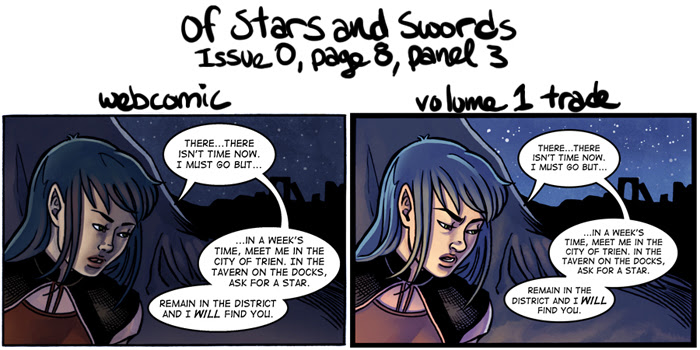 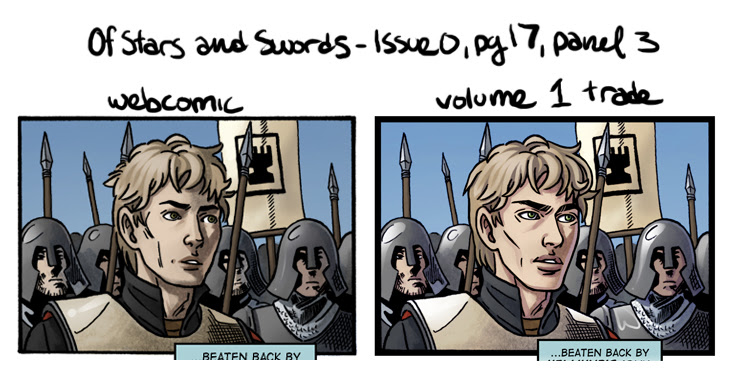 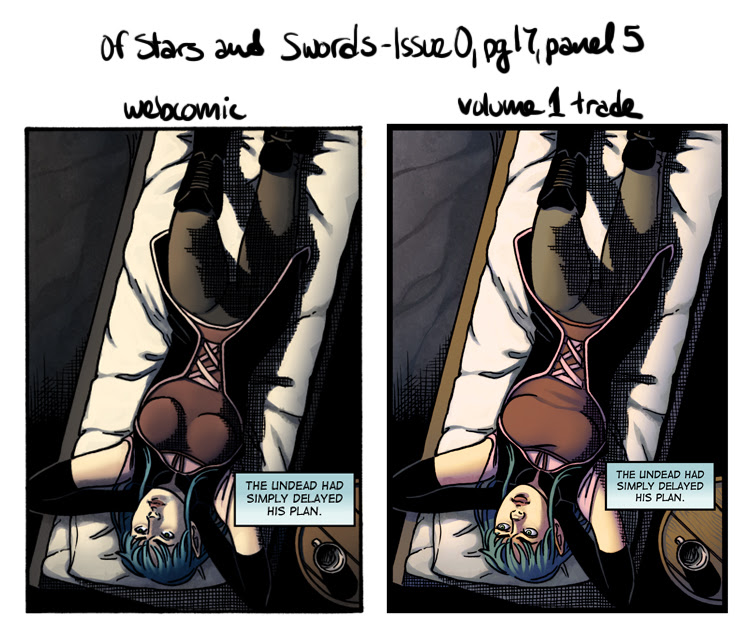 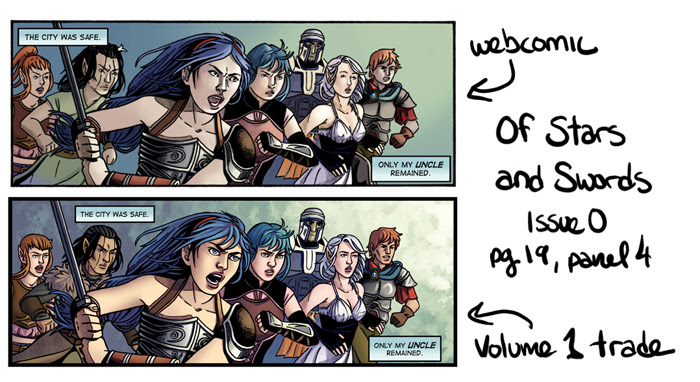 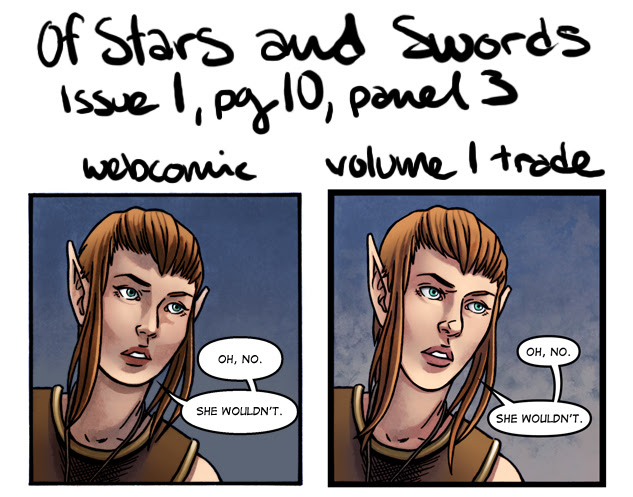 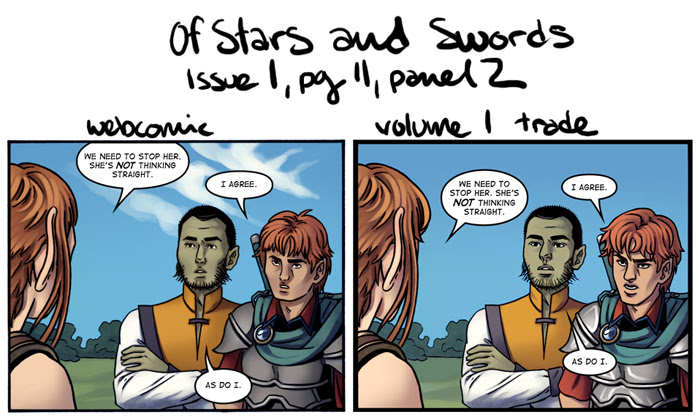 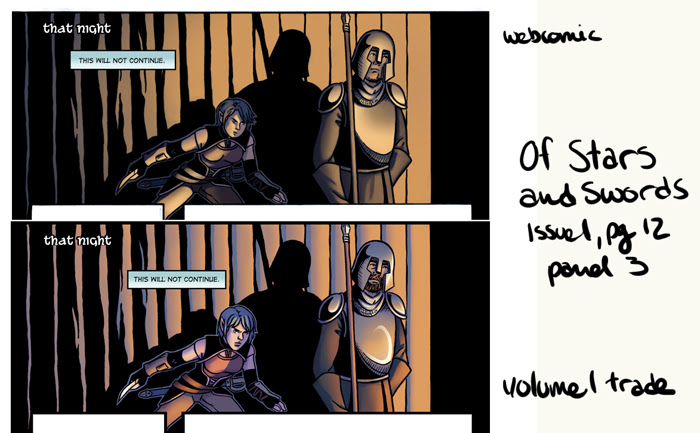 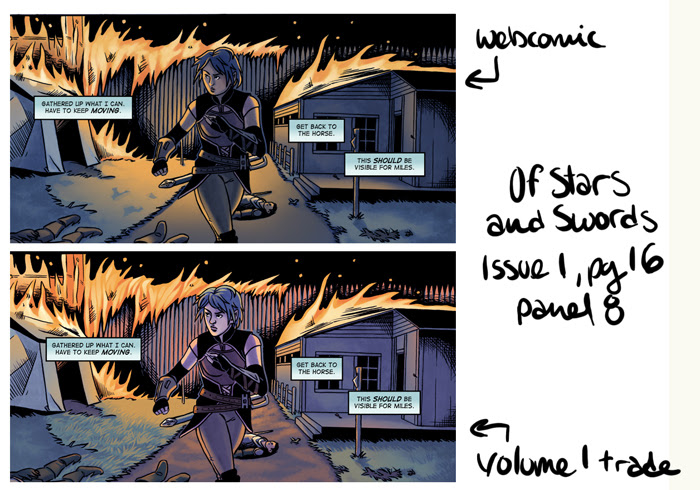 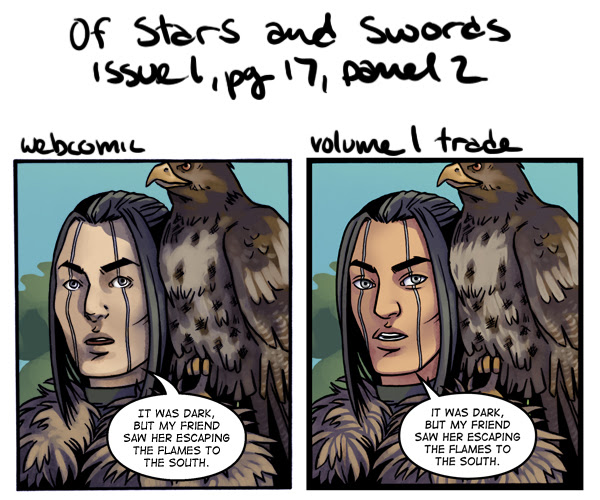 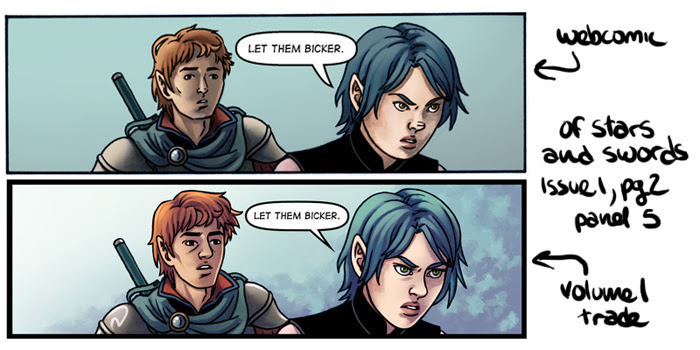 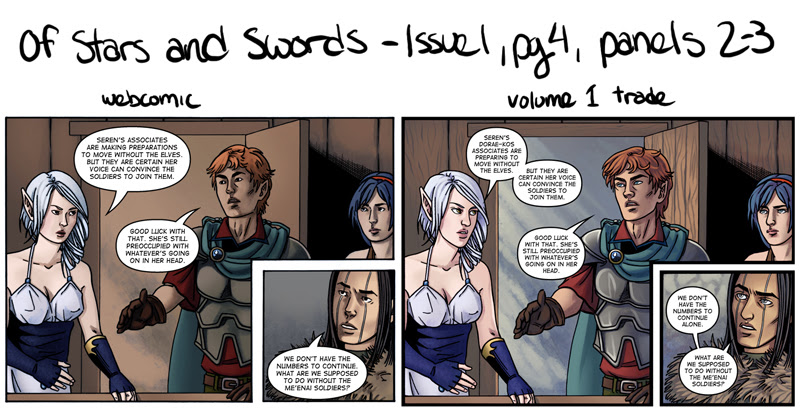 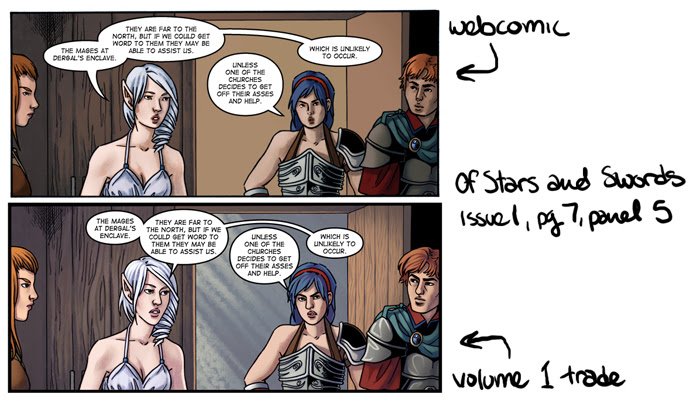 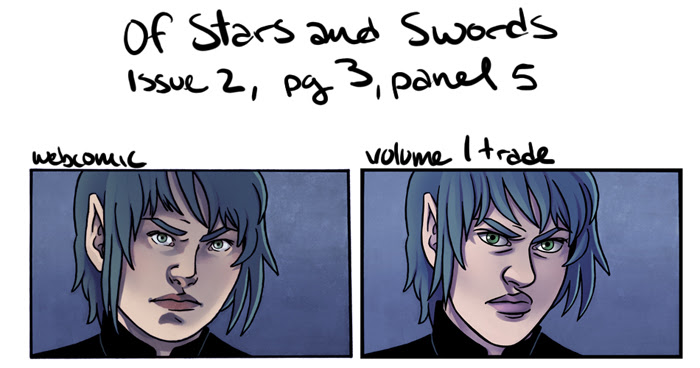 Here's the last of the updated designs for the Of Stars and Swords cast in arc 2: Seren! She was the hardest to get right, mainly because I was hesitant to change her look after the first arc...but she's not a superhero, so there's no good reason for her not to change when the rest of the csat designs looked so good.

I'll leave the rest to Caroline. 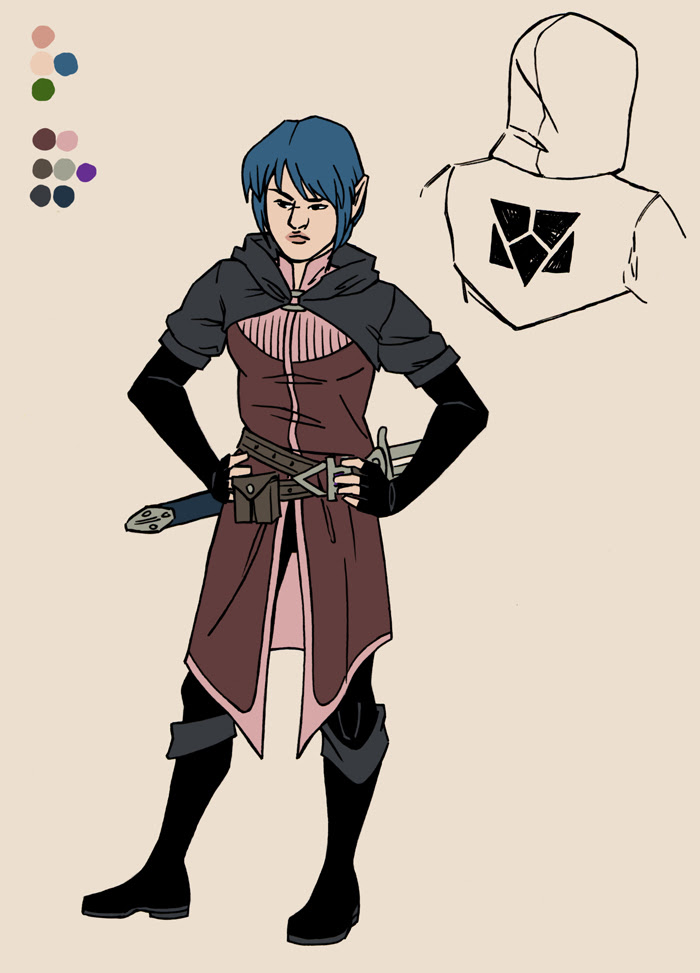 We were originally planning on keeping Seren’s outfit from arc 1, and just updating her belt, daggers, and arm armour. But as everyone else’s designs started coming together, we realized she just wasn’t as interesting in comparison and I really wanted to continue the trend of changing her look to line up with changes to her self-identity. Her new outfit is an upgrade focusing on hilighting her strengths: stealth, speed, and connections. We also decided to visibly link her to the Dorae-Kos by creating an emblem for them that’s kinda hard to miss on her back.

Posted by Graham at 3:49 PM No comments:

Today's look at the Of Stars and Swords Arc 2 character is Cato's brother, Kyros! I'll leave the explaining to Caroline... 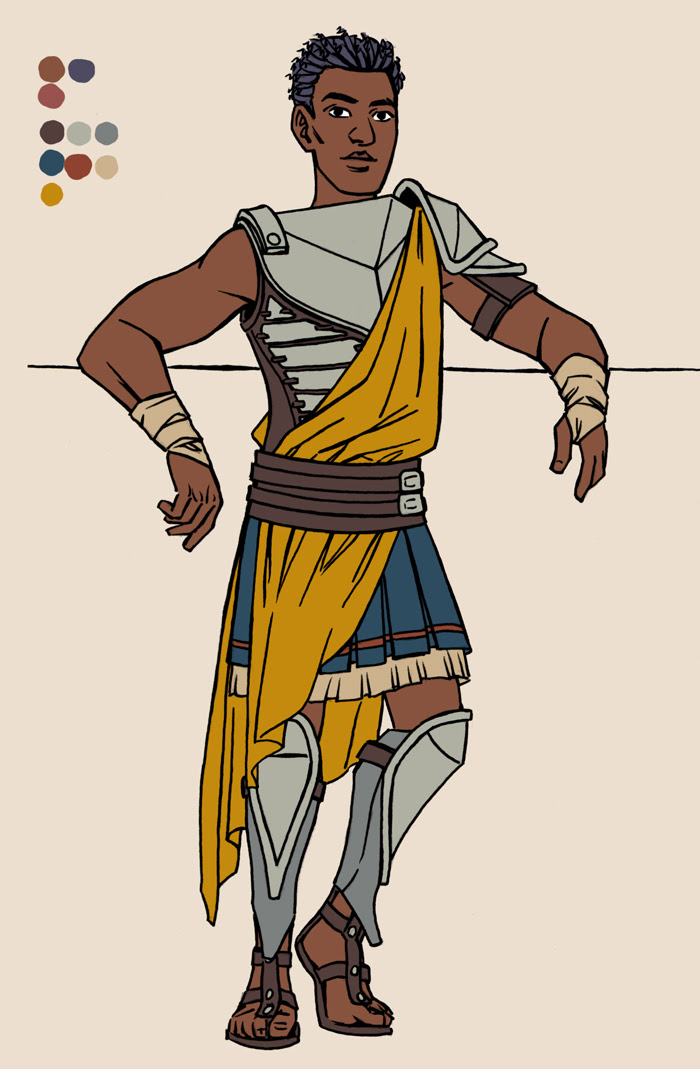 After we figured out Cato we started applying his reject designs to a base for Kyros, this group’s heavy. Kyros needed to look like the kid who always wanted to join the army, but never had the discipline for it. His early designs were too muddy and bland, and didn’t give a strong silhouette (and we didn’t want to go the gladiator route). Our biggest challenge was keeping him from looking like Chloe 2.0. His final outfit borrows strongly from Greek and Roman armours, with a chevalier-inspired upper chest guard. 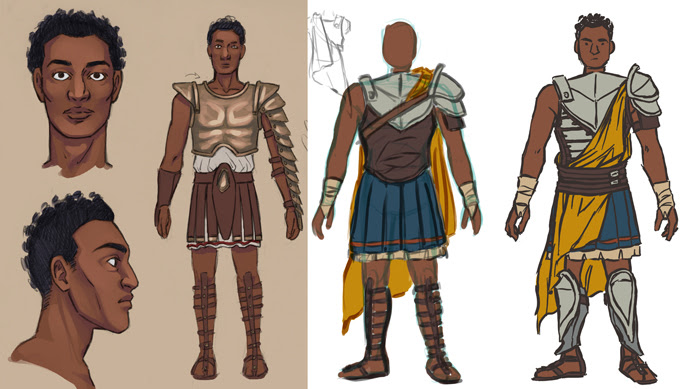 Posted by Graham at 2:13 PM No comments:

Time for another look at the Of Stars and Swords Arc 2 cast. This time it's Kieran, who we've shown off more than a few times and, like Maeira, now looks completely different! Kieran was also held back by his original design from a few years ago. While we were streamlining him, we decided to ditch the bow and let him focus on his swords exclusively. Most of Kieran’s changes have come as a result of Graham figuring him out while writing scripts for arc 2. His personality and attitude weren’t matching the sketches I was putting together. He needed to be sharper featured, and more rugged and militarian. The final costume was inspired by Japanese Samurai armour (jinbaori for the coat, kyahan for the leg gaiters, and even the sword placements), Game of Thrones (primarily outerwear worn by the Starks) and the streamlined fantasy designs in Dragon Age. Posted by Graham at 2:31 PM No comments:

Here's another look at a character for Of Stars and Swords Arc 2! This is Anica, the only character that we managed to nail down on the first go.

Now here's Caroline's design and her talking about it. 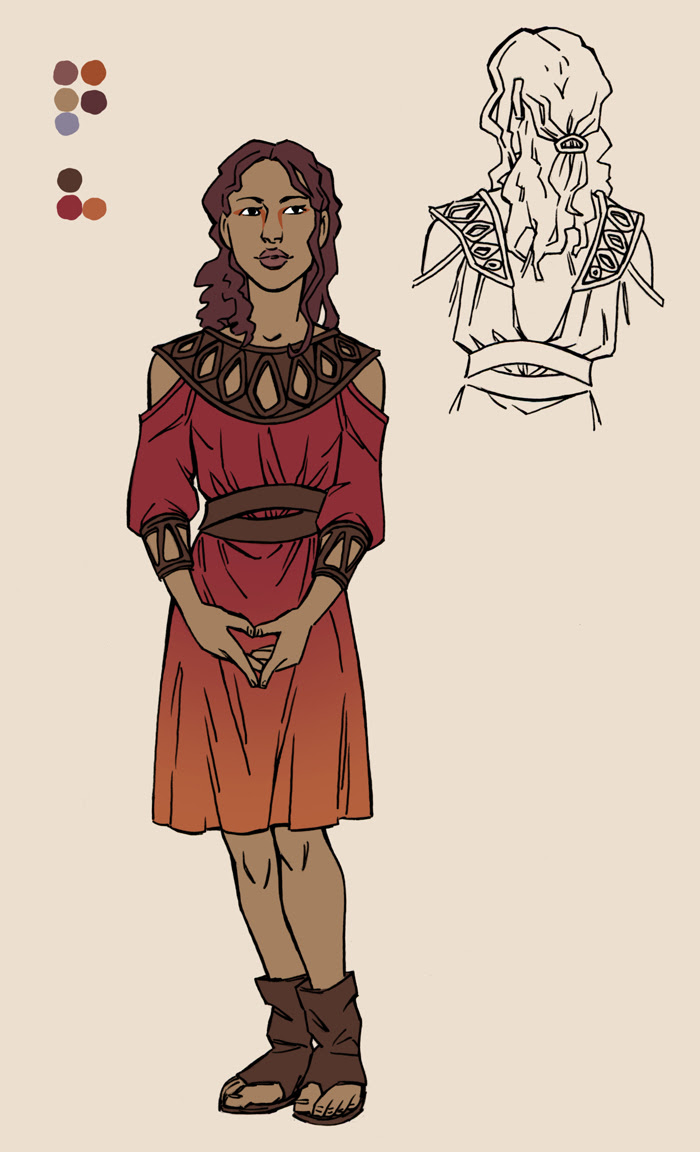 We got lucky with Anica, I knew exactly how she needed to look from the beginning. Our goal was to borrow shapes found in Ancient Egyptian clothing, but combine them in a different way. I wanted her to look like a wealthy merchant’s daughter, so her clothing needed to be rich and colorful, while also practical for daily wear.
Posted by Graham at 2:30 PM No comments:

Next up in the look at the character designs for Of Stars and Swords Arc 2 is Cato. As you can see, he went through some fairly dramatic changes, and I'll let Caroline do the talking about the rest of it! 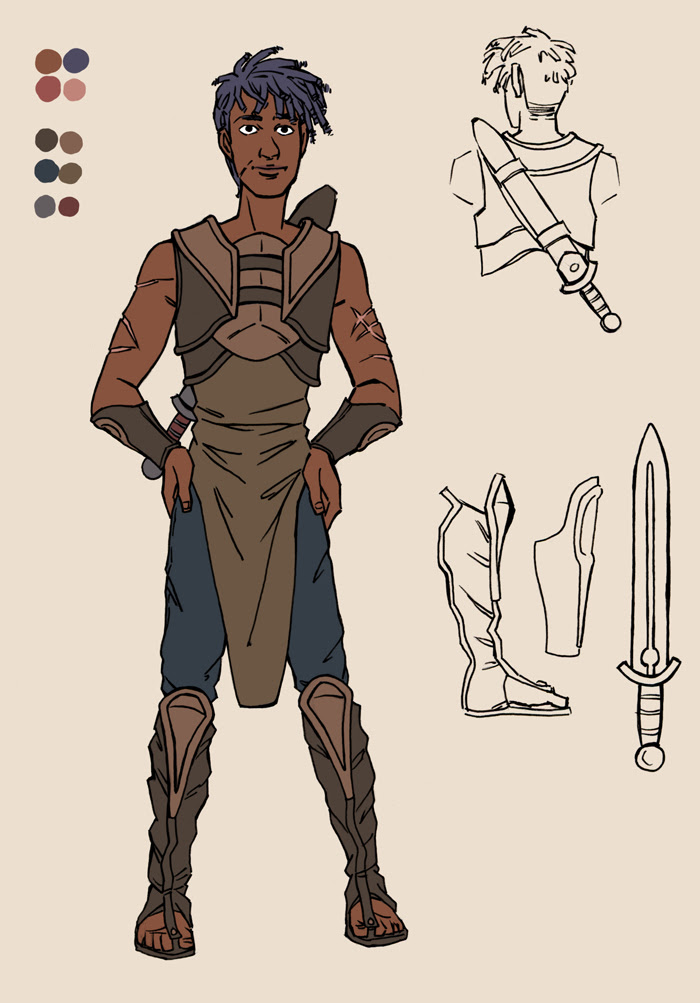 Cato was the hardest to pin down. We always knew we wanted him to have a Greek influence. I originally pictured him as being tan and blonde, and he gradually got darker with each draft. When my original ideas were too bland, I started looking to Troy and East of West for inspiration. 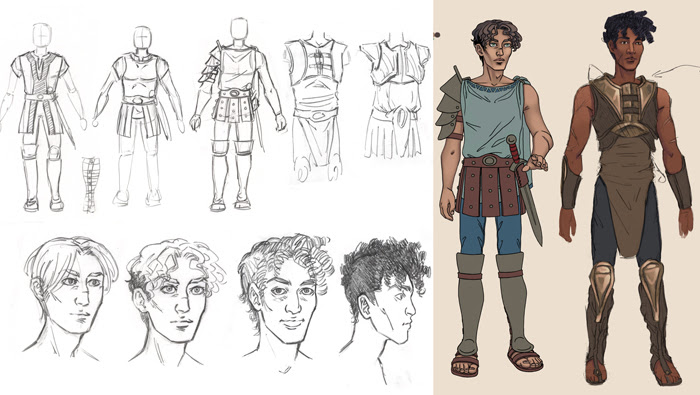 Posted by Graham at 3:29 PM No comments:

The character designs for the second story arc for Of Stars and Swords are basically finalized! We've posted a few iterations of them here on the blog, but now it's time to show off what the characters will look like when the comic actually starts!

First up is Maeira! From here on out, it's all Caroline talking about it, as well. 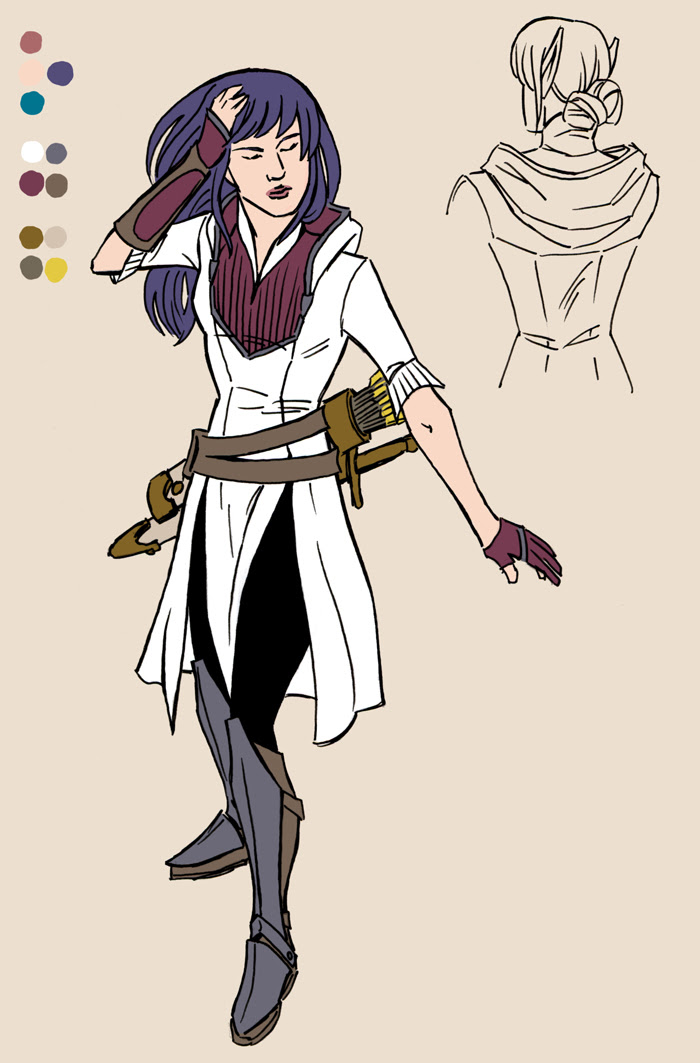 Graham came up for the original design for Maeira yeeeears ago. When it came time to polishing up her design for the comic, we tried to stick to her original costume as much as possible, even though it didn’t have a strong silhouette and was kinda bland. As we developed the other characters we started to notice that our older designs weren’t holding up, so we started from scratch again. 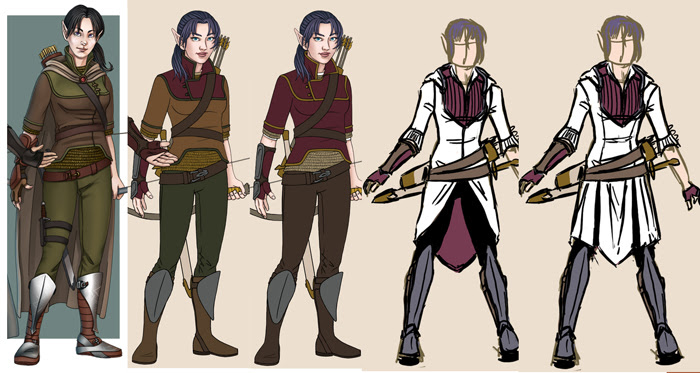 Posted by Graham at 3:00 PM No comments: